In 1936 the Halifax branch ran an animal clinic at Barum House on Harrison Road, later moving to a site at 68 Woolshops.  This, however, was to be the subject of compulsory purchase and, in 1981, the animals were moved to the current animal centre at Wade Street.  Our remit is to accept animals from the Inspectorate that are in desperate need of care.  We aid the recovery and rehabilitation of those animals (mainly domestic pets but some wild creatures) that have been victims of neglect or cruelty.

Through the care of our highly trained and dedicated staff and volunteers, and our fabulous network of fosterers, we are able to care for around 1,000 animals each year. We have teams of  volunteers who sit with our cats and kittens to keep them socialised, and others sit with the dogs in our special ‘home’ room, enabling those dogs who have never known a home environment to get used to every day sounds.  Our dogs are walked twice a day, undergo training and spend time with staff in the offices. 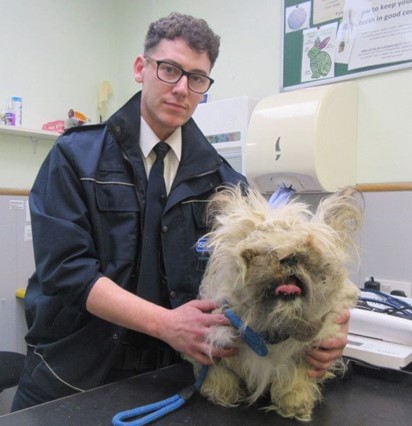 About the National RSPCA…

The first animal welfare charity was established in 1824 following a meeting in a Lyons coffee shop in London.  Richard Martin and William Wilberforce had been concerned for some time about the plight of farm and working animals and called a meeting of like-minded people; and so the charity (then the SPCA) was born.  In 1837 the charity received its Royal patronage and Queen Victoria gave permission for the Royal to be added in 1840.  In the beginning the focus was on working to improve the lives of working animals, such as pit ponies and how animals were handled in slaughter houses.  Martins Act had been passed and was the first animal welfare law which forbade the ‘cruel and improper treatment of farm animals’.  The Peases Act was passed in 1835 which consolidated this law and the prohibition of cruelty was extended to dogs and other domestic animals, for which the RSPCA is best known today.  This first charity developed to become the National RSPCA that we know today, working tirelessly to ensure the welfare of all creatures, campaigning for laboratory testing controls, the protection of wildlife, continually improving farming systems through its Freedom Food label and through it’s Inspectorate rescuing animals from the cruelty, neglect and abuse that domestic animals are too frequently subjected to.

All around the country the success of the new charity was talked about and, wishing to achieve the same standards of welfare for animals, branches were being formed across the length and breadth of the UK, with Huddersfield branch establishing in October 1881  and Halifax  around the same time.

The Halifax and Huddersfield branch charities operated independently of each other until 2010 when the trustees of each decided there was much benefit to be gained for animals if they were to combine their strengths and in 2011 the merger took place. On the 1st of January 2018 the Halifax, Huddersfield & District Branch merged with the neighbouring Bradford Branch after it closed its animal centre because of a lack of funds required to refurbish the facilities to the required standard. The new branch will be called the Halifax, Huddersfield, Bradford & District Branch.

There are currently 160 branches around the country, each operating as a separately registered charity, but each affiliated to the National Society and operating within the policies and guidelines laid down by them.  Although as a branch we fully support the Policies of the RSPCA, we do not run campaigns nor do we have any involvement in the prosecutions.